I used to blog on another platform. Check out what I shared in earlier years here.

At the start of the term we started to make potato people after reading a book about potato people with the help of our teacher Mrs. Agnew.

I made my potato into a normal girl with a dress, shiny gems, glue, flower stickers, feathers and material and some sticks to make her arms and legs.

The week after my group did stop motion with our ipads and potato people.  We had a director, camera person and scene manager and editor.  I was the director and I think I moved the potatoes as the director.

My group was doing a party scene and I was moving the queen and king. Then the baddies came and kidnapped the Princess., At lunch we did voice acting and I think I did the princess and the queens voices that Mrs. Toland wrote on a peace of paper, and some of the words were funny.

And the people in my group were Kamela, Nichole and Nixcent then me, Thanks for reading this. Now for the movie! 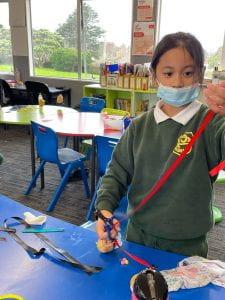 8 thoughts on “Our Class Movie”

About Me | Ko Wai Ahau

Add the link to the About Me blog post here.

Keep connected with this blog